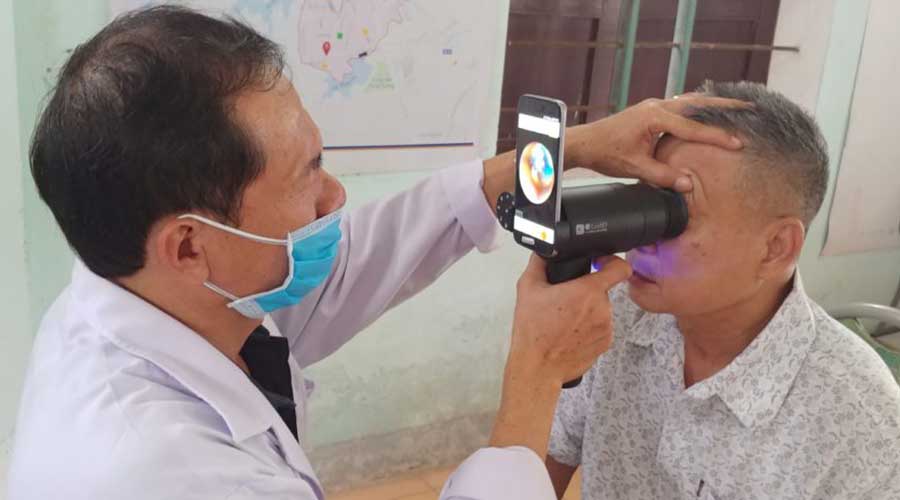 The announcement was made in an official company blog post. In the article, Samsung explains that approximately 2.2 billion people worldwide suffer from some form of visual impairment. Unfortunately, more than half of these cases could be prevented if patients had affordable and reliable eye care tools and services.

Now, Samsung is using legacy Galaxy devices and its new Eyelike Fundus wearable camera, which was showcased at the Samsung Developer Conference in 2019, to create an affordable eye diagnostic tool. The result is a wearable eye diagnostic device that can detect several ophthalmic conditions that can lead to blindness.

The operation of this Samsung device is quite simple. The compact Eyelike Fundus camera connects to an older Galaxy device with a lens. The smartphone then acts as the 'brain' of the device and the fundus camera captures images of the patients' eyes.

The captured images are then sent to an application on the smartphone that uses artificial intelligence (AI) based algorithms to analyse the images and detect ophthalmic diseases. Once a vision-related disease is detected, the app even suggests a treatment regimen for patients. And all this "at a fraction of the cost of commercial instruments", using repurposed Galaxy smartphones.

"This programme embodies Samsung's belief that technology can enrich people's lives and help us build a more equitable and sustainable future for all," said Sung-Koo, vice president of the Sustainability Management Office at Samsung.

Samsung says it has partnered with the International Agency for the Prevention of Blindness (IAPB) and the Yonsei University Health System (YUHS) to help more than 19,000 Vietnamese residents with its wearable retinal camera. Now, with the introduction of the new Eyelike Fundus camera, the company has announced that it will expand its Galaxy Upcycling programme to other countries such as India, Morocco and Papua New Guinea.

Customs duties on telephones: Who is Arintech?

National Call for Tenders Open under emergency procedure at ENSTP